Home Anglican Church of Melanesia, Vanuatu Speaking up: Empowering the vulnerable in a crisis.

Sometimes it is hard to speak up when something is wrong. It is even harder when there has been a disaster, and when you are already experiencing vulnerability in your community. We have been working with our partner, the Anglican Church of Melanesia, to reduce those barriers to speaking up. 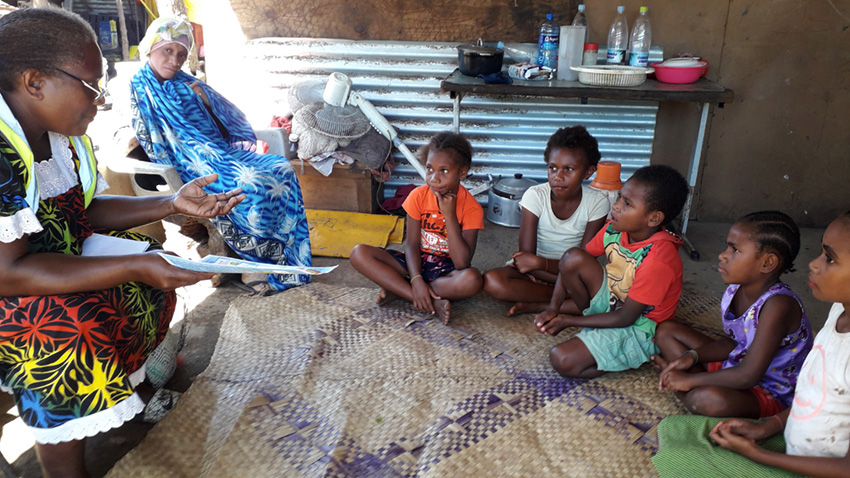 Children participate in a therapy session designed to help them talk about their thoughts and feelings after Tropical Cyclone Harold. Credit: Anglican Church of Melanesia Vanuatu

We all like to have our say. It’s important, especially when it comes to our local area, and particularly when it comes to the wellbeing of ourselves and our families. When it comes to making our local areas safer, more accessible, or putting in place structures to help us improve and be more prosperous, we often have insight and opinions that are useful. Being able to have our say is also important when there are points of failure, when the system doesn’t work quite as intended, or there has been an injustice.

In our project communities, we work closely with our local partners, to help them develop the tools so that they can ensure communities are involved in the decision-making that affects their lives. They deserve the opportunity to say when they aren’t happy, they feel disempowered, or have been wrongly treated, and be heard. Feedback is an essential part of how local people can be more included and participate in the work that is being done in their communities.

During a disaster this is particularly important. Because of a breakdown in normal life, including services and accessibility of essential goods, people experience heightened levels of vulnerability. This is particularly so for members of the community who already experience isolation or dependency, such as at-risk women, children and those living with a disability. This can expose people who are caught in an unfortunate situation to others who want to take advantage of, manipulate or abuse them. This danger is heightened during a crisis as unfamiliar people are coming into communities.

We have been working closely with our partner, the Anglican Church of Melanesia, to develop a system to protect those most vulnerable, particularly during times of disaster or crisis, when they are exposed to additional dangers. 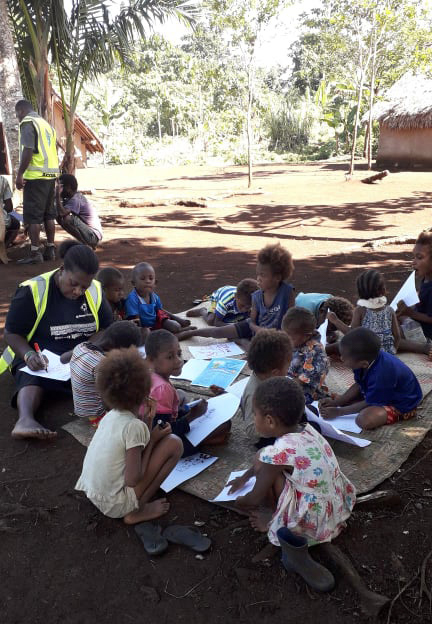 Children are led in art therapy, where they are encouraged to draw in order to express their feelings and to heal from trauma after Tropical Cyclone Harold. Credit: Anglican Church of Melanesia Vanuatu

A Community Based Complaints Mechanism (or CBCM) is another name for a structure through which people can bring up an issue, give feedback, or report if they have been mistreated. The CBCM is a way of ensuring that community members are protected through having somewhere to turn when something isn’t right. If someone doesn’t know where to turn or what to do when there is a problem, it is likely to not be addressed, so having an open channel of communication that the community has decided upon is vital. This channel is developed through having conversations with members of the community, and then, when the preferred reporting channels are created, the community is made aware of it through meetings and activities.

Because the community is involved in developing the system, and have indicated how they feel most comfortable giving feedback, they are more invested in it, and more likely to use it and not feel as vulnerable doing so.

One of the things that was highlighted during these meetings was the responsibilities and rules that people must follow in coming into their community – particularly those who are with organisations or churches – in order to keep them safe. They have a right to feel safe, and the right to seek confidential help and support. Whether it be by email, text, a note in a confidential box, or a meeting with a nominated person, they can bring up their feedback or grievances in a way they feel most comfortable with and know that it will be acknowledged, dealt with sensitively and privately, and that an appropriate response and action will be taken.

After all, an empowered community is a safer community. And people are empowered when they know they can complain when things go wrong. This is a part of empowering communities to be agents of their own future, where they are the ones who decide how things are run. They know where to go to talk through an issue and how to go about making changes. 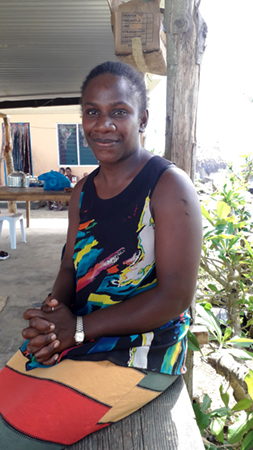 Thanks to support given after Tropical Cyclone Harold, Monique is now hopeful for a brighter future for herself and her son. Credit: Anglican Church of Melanesia Vanuatu

Systems like a CBCM are particularly important during times of upheaval and difficulty following disasters; as was experienced following Tropical Cyclone Harold in April this year. Particularly for those most vulnerable, such as at-risk women and people with a disability, leaving the house and accessing services was more difficult. Door-to-door activities took place, in which women who were in need of pastoral care and support were reached out to. One of these women was Monique, a single mother who was feeling very stressed about the future for herself and her son.

“Being a single mother is not easy,” she said.

“I may be putting on a smile everyday but deep inside me there is always hurt and feeling of neglect by someone whom I thought loved me. Tropical Cyclone Harold has added more stress resulting in having my son being mistreated at times. I didn’t realise that until you came and made things clear for me. This awareness has changed my outlook to life. Now I know that I am created equally special in the image of God and that no one has the right to harm me or my child.”

Many children were impacted by the experience, left unsettled and traumatised by the loss and upheaval. However, children are not usually able to communicate through a typical complaints process, so other pathways are needed. One of the ways that children were given the opportunity to respond and were cared for was through art therapy sessions. In these sessions the children could express their feelings through creative works that detail their perception and understanding of the cyclone and aftereffects; what they saw, heard and how they felt. Through this they were able to open up and talk about their experiences. Afterwards, the children were given activities and games to play to help them cope with their feelings, and the parents were guided on how to listen more actively to their children.

Through developing a CBCM, conducting a door-to-door needs assessment and running pastoral care and child trauma sessions, our partners are doing all they can to help ensure that women, children and people with disabilities are cared for in times of crisis, as well as every day. This just a part of our work in creating safer and more resilient communities in Vanuatu. 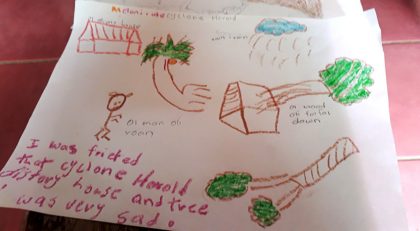 A piece drawn by a child during art therapy shows that they were frightened and very sad when the storm from Tropical Cyclone Harold destroyed their house and brought down trees. Credit: Anglican Church of Melanesia Vanuatu

These response activities were funded by Australian Government, as a part of our membership with CAN DO (Church Agencies Network Disaster Operations), implemented through the Australian Humanitarian Partnership.