Home Akhaya She smiths her own future

We are currently working with Akhaya on a project to train vulnerable women in the art of silver smithing to develop skills for self-reliance. 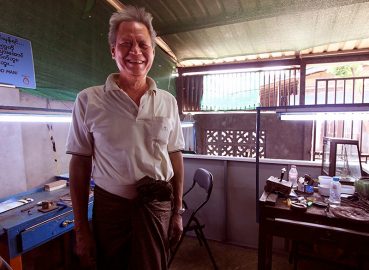 Htun Hilang in his workshop where he trains the SHE-Smiths

Htun Hliang has been a silver smith for over 40 years in his North-Okkalar township in Myanmar. Throughout his career, the majority of trainees he has mentored have been male. Now, through the SHE-Smiths initiative, he is training more females.

Steeped in tradition and historically associated with religion, the practice and craft of silver smithing, or just smithing, as it is known, has only been taught to men, with women being considered unworthy to touch precious gemstones.

SHE-Smiths, a social enterprise from women’s empowerment group Akhaya, is challenging these long held beliefs and training women who have escaped violence in the art of jewellery making. Through offering jewellery smithing training to vulnerable women, the project is not only making a powerful social stance on the value of women, but also allowing women to gain skills to create a sustainable income for themselves.

Htun Hliang has welcomed the opportunity to train women in silver smithing, having already trained his daughters in the art. At first he was concerned about their ability to learn the technical skills, however, he found that it was just the opposite, with the females picking it up faster than their male counterparts.

He says, “Their ability to see beauty in everything, and better concentration make them quick learners. The boys are outgoing and do not concentrate long on one subject. The girl trainees I only just started working with three to four months ago, but they can do basic techniques well now.” 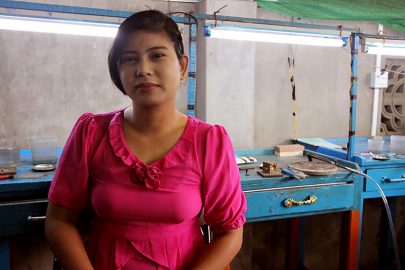 May Thu Kline in the workshop.

22 year old May Thu Kline has been training under Htun Hliang for four months, and is feeling hopeful that learning this new skill is going to set up her future and give her a lifelong purpose. Before starting as a trainee, she worked at a garment factory, where she felt very trapped, having to work very early and coming back very late. But now she is excited about what the future will bring. 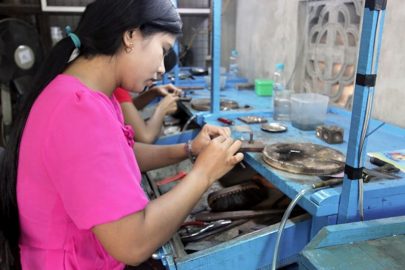 “As I improve with smithing I can create my own jewellery and sell them. From there, I can even start my own jewellery business or I can become a trainer and share my knowledge with others. I will be able to make a good living.”

Akhaya sees the social enterprise initiatives of its work as vital to their broader mission of changing the narrative and dynamic of women’s value in Myanmar society and culture. As they say, it’s about the “interconnected nature of women’s person, her social and economic circumstances.” A female’s enhanced income opportunities, along with increased self-confidence, will result in increased voice and decision-making roles within their family and community.

For now, Akhaya is working on growing the enterprise so that more women are able to become involved, and stepping up the technical skills of the trainees to produce the best quality products. Not only will that showcase the amazing talent of the women who are trying to build new lives, but also make a statement on the value and resilience of female-kind. 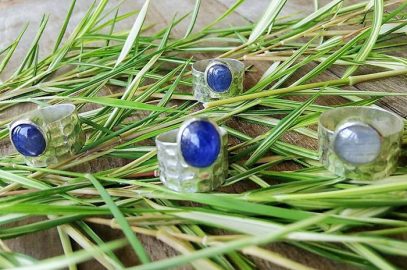 Jewellery the women create through SHE-Smiths is sold internationally