Home Anglican Church of Melanesia, Vanuatu Disability in times of disaster – ensuring those most vulnerable aren’t left behind.

Living with a disability is challenging. In remote and rural settings in Vanuatu, these challenges are compounded by the dangers that come with the threat of natural disasters, like Tropical Cyclone Harold that hit earlier this year. This is how the Anglican Church of Melanesia’s Gender and Protection Response Team acted quickly to help those most vulnerable. 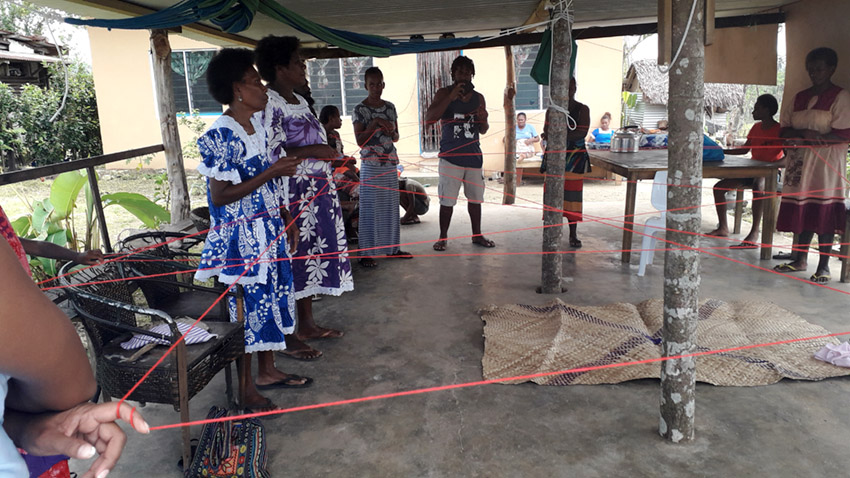 When a disaster hits, it strikes at random. What is predictable, however, is the people who are impacted most. There are an estimated 1 billion people living with a disability, which is around 15% of the world’s population. Of those 1 billion people, 20 million are affected by conflict and disaster.[1]

People who live with some form of disability are among the most vulnerable in times of emergency. Even before a crisis they are more at risk, being more likely to experience poverty and exclusion. This only increases during a disaster, like the COVID-19 pandemic, or severe weather like Tropical Cyclone (TC) Harold which hit the Pacific earlier this year.

The Pacific is particularly prone to natural disasters, and as the climate changes, they are increasingly frequent and more severe. Between earthquakes, cyclones and volcanoes, the region has dealt with a succession of crises. For Vanuatu, which was hit with Category 5 TC Pam in 2015 (the largest in the Pacific in 30 years), the Ambae Island volcanic eruptions in 2017 and 2018, TC Harold’s coinciding with the onset of COVID-19 was an even greater blow.

Emergencies like TC Harold expose persons living with a disability to vulnerabilities in a number of ways; firstly as people evacuate, and then afterwards, as they seek immediate assistance and then try to recover.

At the outset, people with a disability often have less access to evacuation information and facilities. They are less likely to have the information and the ability to keep themselves safe, as they are often dependent on others and devices for mobility and communication. If they become separated from family or caregivers, lose their assistive devices, or are unfamiliar with which evacuation centre can accommodate their needs, then they may not be able to leave their home, or leave too late.

After a disaster, people with a disability face many additional challenges; emergency accommodation might not cater to their physical needs, they might have difficulty accessing their medicines, assistive devices, or appropriate medical care, and have difficulty receiving essentials like food and water.

Particularly in the wake of TC Harold, where electricity and telecommunications went down, those with a disability were put at a disadvantage, unable to communicate with their support networks.  Then the impact of COVID-19 heightened the risks of isolation for those who rely on their support network. 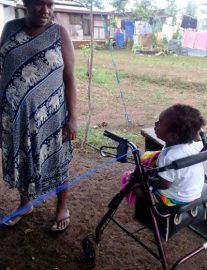 The response team reached out to communities affected by Tropical Cyclone Harold, including children with disabilities. Photo credit: ACOMV

Including the distinct needs and experiences of people living with a disability in both the initial evacuation and response to a disaster, as well as the long-term recovery, is a matter that gets to the heart of non-discrimination and equality.  In times of crisis, we must ensure that the most vulnerable aren’t left behind.

Addressing this need, our partner, Anglican Church of Melanesia in Vanuatu (ACOMV) sent their Gender and Protection Response Team to reach out to those most vulnerable, including those with a disability and at-risk women, in hard-hit urban and rural communities on the island of Espiritu Santo.

The Gender and Protection Response Team is made up of ACOMV Church leaders, clergy, their wives and other staff who are influential and respected within the affected communities. These faith leaders have been trained in how to deal with core issues in their communities. After working on the Ambae volcano response and recovery, they were well equipped and experienced in how to approach, assess and address problems post-disaster.

Within days of the disaster, the team started responding, and in consultation with the National Disaster Management Office and the Vanuatu Society for People with Disability, mobilised with the aim to reach 100 of the most vulnerable families with pastoral care and psychological and practical support. Knowing that people with disabilities are often isolated and without access to information and communications regarding safety and protection, the response team set out to reach people where they were, at home. 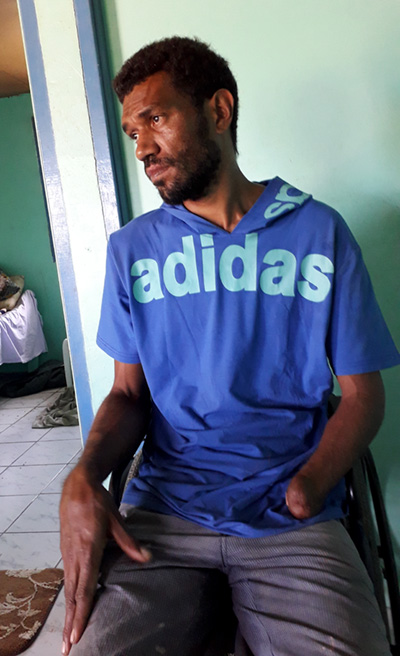 John* has a physical disability, cares for his children and his father, who also has a disability. After Tropical Cyclone Harold, the challenges seemed overwhelming, however a visit from the response team left him feeling valued and hopeful. Photo credit: ACOMV

One man the team met with was John*, a 32-year-old man living with a disability. He is caregiver to his young children and primary carer for his elderly father, who also lives with a disability. Before the cyclone, John relied on his wife’s income and worked in the evenings, running his own kava bar.

After the cyclone, however, there was a lot of stress, and life became very challenging.

“Because of social distancing, people no longer come to visit my dad…it is very stressful, especially when I cannot offer much needed assistance to my father because of my disability, and that hurts a lot,” John said.

The support that John received from the team was more significant than just a visit and some help. The care that he was shown boosted his morale and made him feel not as isolated as he was. He exclaimed,

“I feel so encouraged by your awareness for the caregivers. I do not want people to focus on my disability, but rather my ability, and to recognise me as a potential member of this community. I am touched by your visit because you have not forgotten me.”

“I’ve been taking things for granted that everybody, regardless of ability are safe, but now I know that special attention should be given to those who are more vulnerable,” one community member responded.

In addition to door-to-door visits from the team, meetings, conversations and other activities were organised for people in the community to come together and understand equality and inclusion. One of the activities was the ‘wool exercise’, where wool represents the connections between members of the community, visualising the relationships.

All these things are ensuring that in the event of another crisis, families and the wider community will be working together to ensure that everyone, men, women and children, regardless of ability, will be safe and cared for.

These response activities were funded by Australian Government, as a part of our membership with CAN DO (Church Agencies Network Disaster Operations), implemented through the Australian Humanitarian Partnership.

Read more about this work and how our Pacific island partners have been affected.