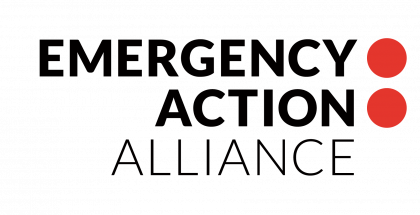 The EAA is made up of 15 Australian-based member charities who are experts in humanitarian aid and specialise in different areas of disaster response. By combining the expertise of the 15 members, the EAA can focus the desire of Australian donors to help into a targeted response to an international emergency.

Mykhaila* and her daughter from Loubny, central Ukraine, pose for a photograph at the Polish border on 8 March 2022. They travelled by train to Lviv, Ukraine, and then took a bus to the Medyka border crossing point and eventually arrived in Poland by foot. They intend to travel onwards to Germany. *Name changed for security reasons Photo: Anthony Upton/DEC

What does the Emergency Action Alliance do when disaster strikes?
When a major disaster hits countries with limited capacity to respond, the EAA brings together the knowledge, expertise and resources of the 15 leading humanitarian charities. With the support of the members, the EAA can launch a coordinated, targeted fundraising appeal under the Emergency Action Alliance banner in order to streamline efforts and help more people in their moment of need. The money raised will be used quickly and efficiently to help those affected through the EAA’s network of member organisations.

How are the funds allocated?
The EAA has a unique process for allocating funds to the charities best able to deliver aid in that particular emergency, allowing them to rapidly scale up operations on the ground and help more people. While members fund the EAA’s running costs, the EAA gives them back the money raised in EAA appeals to carry out their vital work.

So, when the Emergency Action Alliance launches a Crisis Appeal, instead of feeling confused about which charity to donate to when disaster strikes overseas, Australian donors wanting to help can have a single, trustworthy way to make an impact.

Find out more about the Emergency Action Alliance.