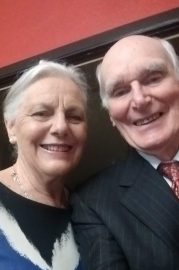 We are constantly grateful for the generosity of our supporters. It is no exaggeration to say that, without them, we simply would not exist.

AOA is a conduit between our dedicated supporters and our partners in ministry overseas. Ted and Brenda Mouritz have been supporting AOA for 30 years. It is an incredible commitment and they spoke to us about their motivations for supporting us.

Brenda was born and raised in Melbourne. Now in her late 70s, she attends St John’s Toorak with her husband, Ted. Brenda was a midwife until her retirement at the age of 60, and since then has actively participated in the pastoral care of the parish. She has been very involved in the parish and, in earlier years, in the wider Melbourne diocese as a synod member and the Southern Regional Council.

St John’s is a special church for both Brenda and Ted. They met at St John’s and were married there in 1992.

Ted’s background followed a different trajectory. Growing up in rural Western Australia, he followed various careers in the overseas service, corporate and private consulting, and ending in large project development. He retired in 2010 at the age of 73. He came to Melbourne in 1973 and has been involved in the local State primary school, and St John’s since about 1982. He has served there in the choir, on Vestry, as a Warden and in their Parish life.

Ted and Brenda’s relationship with AOA almost goes back to our beginnings. In 1990, their vicar was the late Philip Newman, who was of course instrumental in setting up what was then The Archbishop’s Relief and Development Fund. Beth Hookey as convenor set up an office in the parish Hall at St John’s. Beth and Brenda became friends, which allowed Brenda to learn about the aims of the Fund, about it being a grassroots organisation giving to projects that local people required.

Beth’s extensive travels allowed her to become well acquainted with needs in certain countries. As a parish, St John’s was privileged to host several African clergy including Bishop Desmond Tutu and Bishop Sengulane from Mozambique. Both these men made a lasting impression on Brenda, so her support was cemented.

Ted’s journey towards supporting AOA was, again, rather different to Brenda’s. Ted has visited or worked in more than 20 countries across Asia, Europe, and North America since 1965 during multiple careers. He has seen the poverty and suffering that is the lot of millions across the world. A tour in Zambia extended this experience to Africa when the AIDS crisis was at its height.

“We had hoped that we could do some work in Mozambique, but that failed due to our extended working lives and Parish responsibilities. So, giving regularly to AOA and reading Abundance twice yearly keeps us abreast of the splendid work being achieved. We also enjoy the Lent and Advent reflection booklets. We applaud the programs, and the outcomes AOA achieves across the world in the name of Jesus Christ. And we applaud them for their amazing long-term commitment to bringing abundant life to communities across the world”.

AOA is blessed to have faithful supporters like Ted and Brenda Mouritz, who in October 2021 reached the milestone of 30 years of support. We are grateful to our many faithful and passionate supporters who change the lives of thousands of people every year.