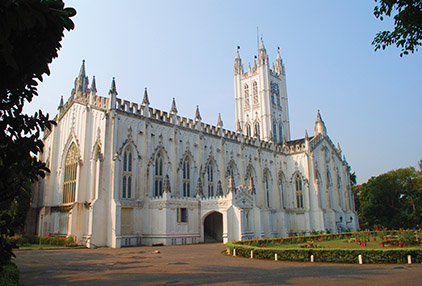 During the Bangladesh Liberation War of 1971, which led to East Pakistan becoming the independent state of Bangladesh, an estimated 10 million refugees fled from the conflict zone over the border into India. Most went to the nearest city – Calcutta, where they either increased the population of existing slums, or started new ones.

The Reverend Canon Subir Biswas of St Paul’s Cathedral in Calcutta responded to the refugee crisis by founding the Cathedral Relief Service (CRS), which provided emergency aid. After the war, an estimated 1.5 million refugees stayed in India, a great proportion in Calcutta. CRS shifted its emphasis to supporting these people who lived in great poverty in the city’s slums, providing education, skills training and healthcare, along with daily distribution of food and clothing.

45 years on, the work of CRS continues. It now operates as a development NGO with education, healthcare and empowerment programs that support poor and disadvantaged communities in the slums of the city now known as Kolkata, and in rural villages in the states of West Bengal and Jharkhand.

Anglican Overseas Aid has been supporting CRS’ women’s empowerment work since January 2011. Projects in eight locations around Kolkata focus on giving girls and women skills, opportunities and confidence to break down gender inequalities and tackle poverty, illiteracy and disadvantage that disproportionately affects women. The program focuses on two main activities. The first is skills training, in which CRS instructors offer year-long courses to girls aged 14 and over in sewing, embroidery and knitting. Financial and business management skills are also taught and all girls are encouraged to set up individual bank accounts. The classes are also an opportunity for the women to spend a few hours away from their domestic responsibilities in the company of others. By the end of the course they have the skills to make a range of clothing, jewelry and soft toys for sale and set up their own micro-business.

The second main activity is self-help groups. Each group has 10 members, each of whom deposit an agreed amount of money each month into the group bank account. Members can then apply to the group for loans for their businesses – such as buying a sewing machine or buying some chickens to rear – which are paid off over time. These groups, run democratically with the full participation of all members, have had a tremendous impact in giving control over decision-making and income-generation to women who are often marginalised.

Sewing for the Future

Sonali Das, 26, is part of CRS’ Gobinda Banerjee Lane Women’s Sewing Group. She lives with her family in an overcrowded slum in southern Kolkata.

The program’s tailoring and embroidery training is run in the same building as the local school, which means that mothers are able to leave their children in a safe environment while they attend to their own learning. Once they have completed their courses, students are encouraged to form self-help groups and establish income-generating activities.

Sonali herself was a student at the school and is now a member of the women’s empowerment group, where she also teaches sewing and embroidery. She has also been able to have her own sewing machine at home, so that she can make and sell blouses and other clothes to support her family. Her husband is a driver, and she has a seven-year-old son. Her dream is that her son receives the best education possible, and that her own skills increase so that she can improve the quality of her own work and those in the group. For Sonali, one of the key benefits of the group is that it “builds friendships and we support each other”.