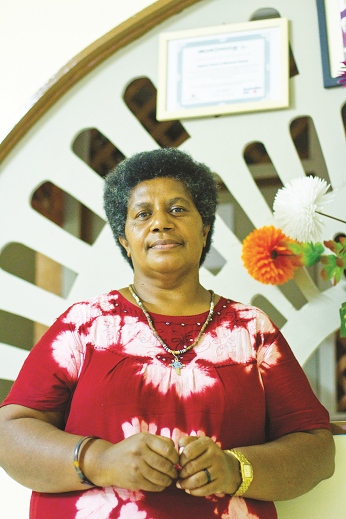 You would think that being a mother of four children is a big enough job on its own. But for Ethel George, helping disadvantaged women is an additional labour of love.

Ethel is from the island of Ambae in Vanuatu and is the Women’s Desk Officer with the Anglican Church of Melanesia (ACOM) in Vanuatu, our partner in the Pacific Island nation. Anglican Overseas Aid has been working with Ethel and ACOM since 2011, and is currently supporting their ‘Livelihoods and Women’s Empowerment’ project.

Vanuatu culture is very patriarchal, which means a focus on women’s self-reliance is important. Ethel works with the Mothers’ Union, the only established women’s organisation in the Anglican Church in Vanuatu. She coordinates programs to help women become more self-reliant through income generation, financial literacy, and savings groups. This, alongside Ethel’s community education work, contributes to the reduction of family violence in communities.

When asked about the impact that family violence has in Vanuatu, Ethel’s countenance grows sombre but you can see that she is hopeful. The project will soon launch a new centre that will work closely with existing government programs to provide improved services and support to survivors of violence, at the same time running education and awareness raising projects to combat violence in the community. “There are victims that should be referred to the Government’s family protection unit and the police” she explains. “Some will also be referred to the women’s centre. They see the need to work together.”

As our discussion continues, Ethel’s motivations for doing this work come to the fore. “I see it as my business to help the women come to a level where their living standards are increased so they enjoy the same fulfillment in life as a woman that they are supposed to. That’s what love is to me. To do something to help.”

Ethel’s vision for the future is to see the work flourishing through women knowing how to manage their money and other resources. She wants women to “have some independence, to have their self-esteem increased so they see they are playing an important role in looking after their families, see themselves as equal with their husbands.”

Ethel believes that one day, gender equality in her home country will become normal and that future generations will see the benefits of it.

The work Ethel is doing is funded by the Australian Government and donations from Anglican supporters. She is deeply appreciative of this, growing emotional as she expresses her gratitude. “From the bottom of my heart thank you so much that you can give to help them”, she states. “I am doing my best to use whatever resources given to benefit the women and families.”

Those women and families are certainly benefiting from the work of this inspirational leader.

If you would like to donate to our ‘Livelihoods and Women’s Empowerment’ project in Vanuatu, click on the ‘Donate Now’ button: