Home Diocese of Nampula, Mozambique Love in Action: Ministering to the displaced in Mozambique 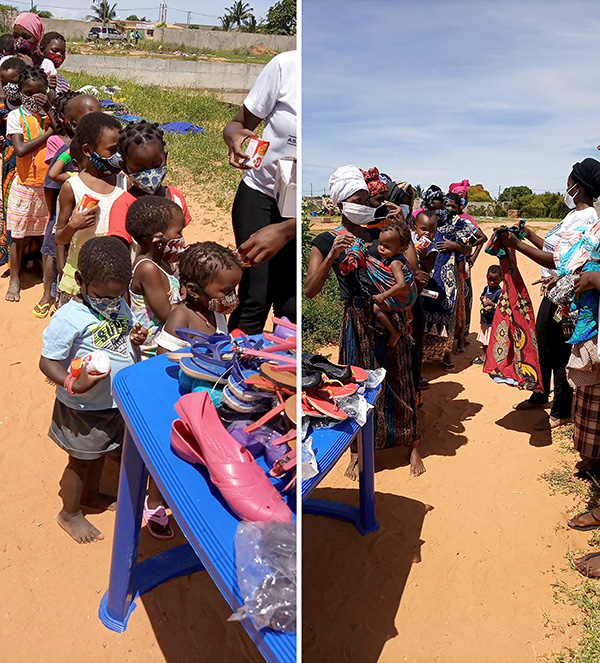 In AOA’s Easter Appeal, “Hear Their Cry”, we focused on the plight of the people of northern Mozambique in the province of Cabo Delgado where civil and military conflict has resulted in the devastating loss of 2000 lives and mass displacement. It is estimated that over 700,000 people have been displaced due to the insecurity and violence since 2017 (source: International Organisation of Migration). Here is an update on what is happening and activities to help those displaced.

On March 24th, local militants aligning themselves to the Islamic State (IS) conducted a major attack on the northern coastal town of Palma, attacking the police station, robbing the town’s banks and attacking homes, resulting in the deaths of many civilians. In the following days, civilians were killed in the streets and in their houses; some of the victims were beheaded.

Since the attacks at the end of March, the exodus from Palma district has continued. Hundreds of internally displaced persons (IDPs) arrive daily by foot, bus, and boat in Nangade, Mueda, Montepuez and Pemba districts, and it is believed that many traumatised people are hiding in the nearby forests. Many displaced people need psychological support to process the trauma and loss they have experienced.
Of the more than 700,000 IDPs displaced due to insecurity in Cabo Delgado, 80% have found refuge living with relatives (source: International Organisation of Migration). However, this has placed an even greater burden on the hosts, themselves often lacking adequate food and now experiencing increased living densities at a time when both COVID-19 and cholera continue to be present in the province.

Anglican Overseas Aid’s local partner, The Anglican Missionary Diocese of Nampula, is already working across 90 communities through the Towards Abundant Life project and continues to respond as best it can in the crisis affected communities.
AOA sent $10,000 from our Rapid Response Emergency Fund earlier this year to provide critically needed supplies as the Diocese works to support Internally Displaced People (IDP’s) in the Cabo Delgado province. These funds were used to provide immediate relief to the vast numbers of displaced people seeking refuge in the provincial capital of Pemba.
With support from the Australian Government through the Australian NGO Cooperation Program (ANCP), AOA has been able to direct a further $20,000 to the Diocese. These funds have been used to further build resilience in the 28 program communities that are hosting IDPs from Cabo Delgado. 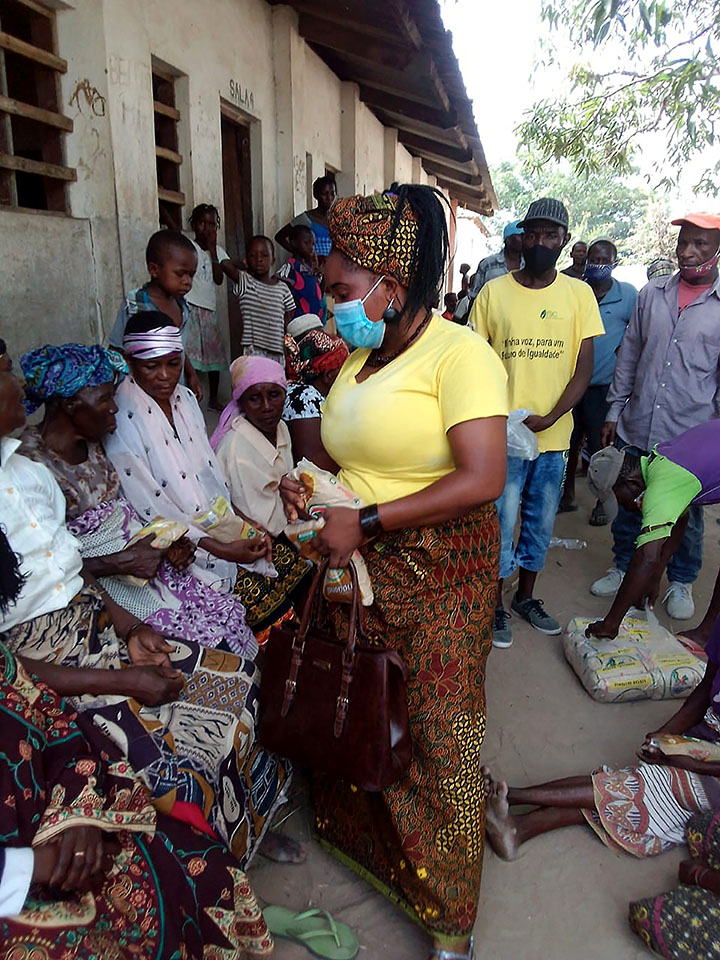 Muassite, the Mission Director at the Anglican Missionary Diocese of Nampula hands out supplies of staple food. The Diocese has been working with the community in Pemba since the start of the crisis.

Local Adeptos (project community workers) and church leaders undertook a needs assessment and identified that most local families are hosting at least one or two additional families within their compound. Most families are staying under an open but roofed structure offered by their host or where there is room, all sleeping inside the hut on mats. Some families who have mosquito nets use them at night to protect young children and pregnant women.

There is a great shortage of food and a need for water treatment. The available water points in the communities are always crowded and the water not safe for drinking. In addition to the physical needs of shelter, food and water, the trauma has left many people in need of psycho-social support.

To tackle these two areas of need (physical and psycho-social), local emergency committees have been established in each of the 28 communities. The emergency committees are comprised of local community and religious leaders, together with representatives of women, youth and people living with a disability. The groups work to ensure internally displaced people are well received in the community and assisted without discrimination. Group members have been trained on vulnerability assessment which assists them as they use a questionnaire when visiting each family to assess their situation. This means that assistance can be carefully targeted to those in greatest need. When aid is delivered, a family representative is selected who must sign for items received.

To assist with food, local families are sharing their land to create kitchen gardens, and the Anglican diocese has established a demonstration farm for community members to visit, learn and replicate the practices in their home compound. The establishment of agricultural skills training is designed to not only help local and internally displaced people in the short term but support, encourage and inspire lasting agricultural change that will assist with reliable access to food. The local emergency committees and Equipas de Vida (church-based volunteers translating as ‘Teams of Life’) are assisting the most vulnerable families by providing seeds and their kitchen garden and access water for the plants.

Local Adeptos (project staff) are providing hygiene training including the correct treatment of drinking water to reducing water-borne diseases. The importance of using mosquito nets for children and pregnant women is also being communicated where families can access nets.

Psycho-social support is a critical need. The Christian Council of Churches in Mozambique (CCM) has been working with religious leaders in Cabo Delgado and Nampula through Peace clubs, where both Muslim and Christian religious leaders are trained to counsel families on trauma and shock. Local Anglican priests and catechists are conducting pastoral visits to assist traumatised families and give them a message of hope.
The Rev. Claudina Cabral, a key leader in the Diocese of Nampula, has been working with all the other priests, Mothers Union members, and catechists from Cabo Delgado to engage and help traumatised families share their stories. All the diocesan priests and zonal catechists have also been trained on child protection and safeguarding policies.

Across the 28 communities, 6,720 people will be directly supported by this additional program.

AOA acknowledges the support of the Australian Government through the Australian NGO Cooperation Program (ANCP) in supporting the internally displaced people of Cabo Delgado. We are so thankful that so many of our faithful supporters did “Hear Their Cry” and contributed through prayer and donations to support our brothers and sisters in northern Mozambique. Your commitment enabled a further $40,000 to be sent to continue the support of the physical, psycho-social, and spiritual needs of these traumatised communities. 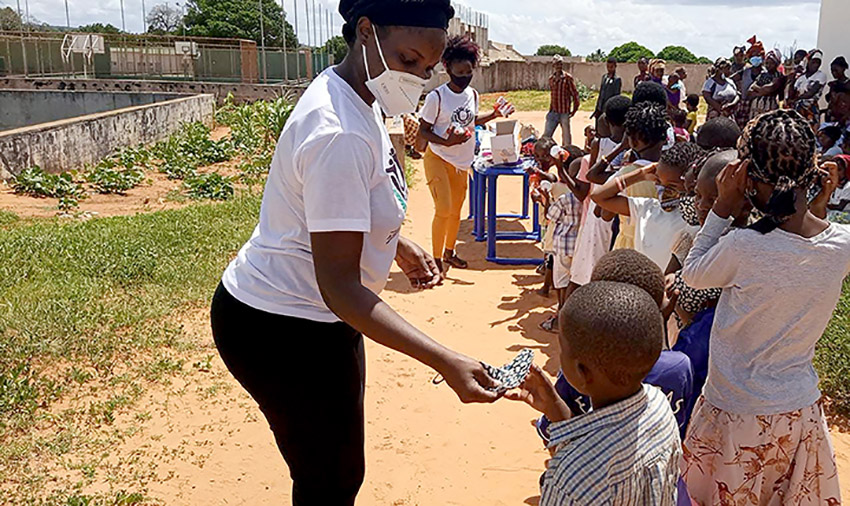 Children are grateful to receive line up to receive masks and other items in Pemba, Mozambique

Money sent from our Rapid Response Emergency Fund to support those impacted is funded by your generous donations.