Home Anglican Church of Melanesia, Vanuatu Living with a volcano in your backyard 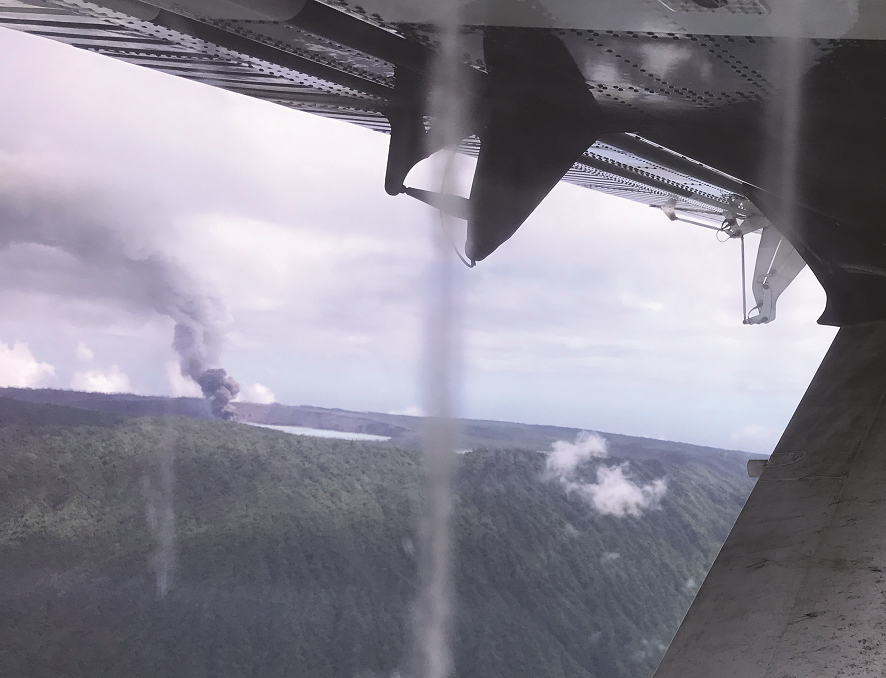 When the volcano on the island of Ambae in Vanuatu erupted in September 2017, our Program Manager, Grace, was on nearby Pentecost Island. She took this photo from the plane as she left the area.

Have you ever seen a volcano shooting lava into the sky?

That’s what happened in September last year, and has happened again in recent weeks on the island of Ambae in Vanuatu.

When the Manaro volcano threatened to erupt last year, it forced the Vanuatu Government to order the evacuation of the whole of the population of Ambae – about 10,000 people.

One of our colleagues, Grace, was on nearby Pentecost Island at the time. She could hear the volcano herself and heard from a local chief, Phillip, who is 80 years old, who said, “I have never heard the volcano like this and have never seen the red lava spew out of it like this”.

The population of Ambae was able to return to their island. But since the beginning of this year, the volcano became active again – expelling an enormous build-up of volcanic ash from previous activity, as well as causing acid rain, expelling gases and creating landslides.

While those who have the means have been relocating over past months, the Government of Vanuatu is embarking on temporary and permanent relocation of communities in the month of May.

All areas of the island of Ambae have now been impacted, including the areas previously declared by the Government as safe zones. Heavy ash fall has contaminated all water sources, and ash, along with acid rain, has destroyed crops. The air quality has been so severe that by mid-afternoon in late April, people were using torches because they couldn’t see due to the ash. Landslides have made it difficult at times to travel across the island to deliver much needed supplies of food and water and to conduct health assessments.

Children are also affected due to the closure of schools and lack of safe spaces to play. Animals are malnourished as there is limited food for them to eat.

All of this adds up to severe trauma being suffered by the residents of what, to many of us, is known as a tropical paradise. The threat of permanently having to leave your homeland is devastating, particularly to ni-Vanuatu communities to whom connection to land is such a critical and integrated part of community and everyday life.

Anglican Overseas Aid is responding to this disaster through the Church Agencies Network Disaster Operations (CAN DO) consortium, of which we are a part. We are working with others to invest in community cohesion, particularly the protection of women and children, so that people are more resilient and able to adapt to the changing environment as well as respond to future emergencies.

We are working particularly closely with our implementing partner, the Anglican Church of Melanesia (ACOM), as well as ADRA and other churches through CAN DO, to identify the best way for local churches to support local communities in a way which complements and fills the gaps of government and NGO response within Vanuatu. In the longer term, our response will most likely continue to focus on protection of women and children, psychological support and peacebuilding, and long term resilience in a country vulnerable to environmental disaster.

Our program with ACOM will continue to adapt to changes in location. It will most likely also expand to multiple locations, including the island of Ambae, as well as host communities such as those on neighbouring Maewo.

Life in the shadow of an active volcano is extraordinarily stressful. Please keep the people of Ambae and our partners in Vanuatu in your prayers as they come together to respond to and deal with the ongoing effects of the Manaro volcano.