Home News Honours, Welcomes and a Thank You 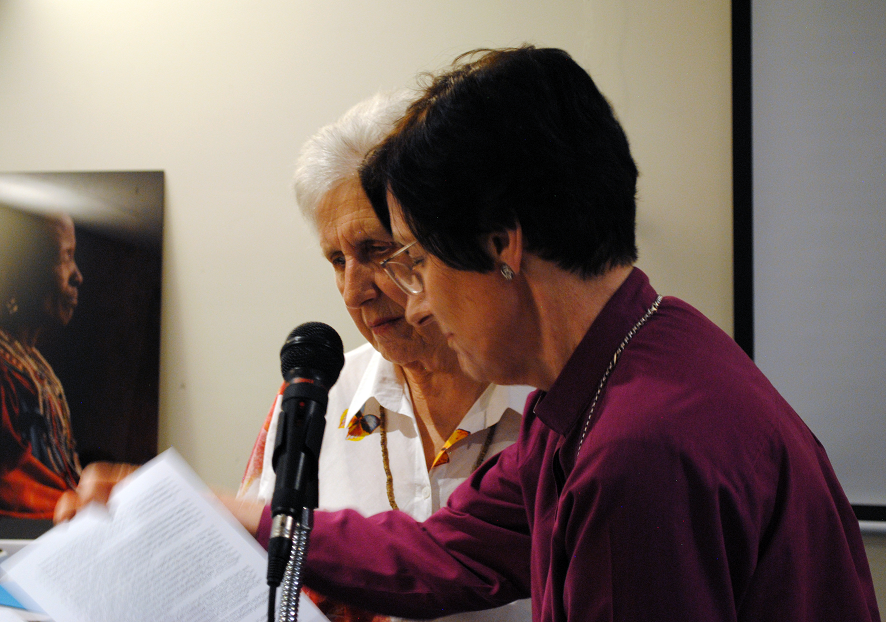 In November 2017 we were pleased to hold our AGM at St John’s Anglican Church in Camberwell. About 60 people gathered for the occasion, starting with a service in the church led by Revd Canon Dr Ray Cleary. After the formal proceedings, we adjourned to one of the function rooms to honour Beth Hookey as a Life Member, as well as thanking and fare-welling Denise Nichols from the Board, and welcoming new Board members, Dr. Robin Ray and Bishop Paul Barker.

Former Anglican Overseas Aid Executive Officer, Beth Hookey, was confirmed as a Life Member of the organisation, with Bishop Alison Taylor delivering the citation and presenting the award. Below is the full text of the citation:

Beth Hookey was a member of the first official Board of the Archbishop of Melbourne’s International Relief and Development Fund (now Anglican Overseas Aid (AOA)). The Board’s first meeting was in November 1988, after the Synod of the Anglican Diocese of Melbourne endorsed the creation of the Fund.

Beth was appointed as Executive Officer by Archbishop Keith Rayner in 1992 and served until In that period she began the process of building AOA’s organisational capacity and when the decision was made to seek accreditation with the Australian Government’s AusAID, to support new countries or to find new partners, Beth faced the personal challenge to learn more, do more and ‘be’ more in her typical unassuming way. She was also not afraid to call on the professional skills of others to assist her. AOA was successful in achieving full accreditation in 2005.

When a new CEO was appointed in 2001, Beth continued as AOA Program Manager until 2006, and then as a Program Officer from 2006-2007. She was vital in the AusAID accreditation process in 2010. During 2011-12, Beth returned to AOA in honorary roles as Small Grants Officer, and then Middle East and Asia Program Manager. Her work for and support of the organisation has been neverending, faithful and enthusiastic.

AOA’s relationship with these projects has been long-lasting, and Beth played a critical role in establishing these personal and organisational partnerships. She had a long and sustained friendship with Karen leaders in the refugee camps in Thailand, reinforced by many visits to the Thai-Myanmar border over 25 years. Naw Tamla Moo, Secretary of Karen Anglican Ministry at the Border recognises Beth’s “every endeavour and patronage, her great commitment to and achievements of the Karen Anglican Ministry at the Border since 1992 as our partner, mentor, mother, colleague and friend.”

Successive Directors and Chairs of AOA have all remarked on Beth’s hard work, efficiency, common sense and faith. Archbishop Keith Rayner noted that “her approach was always practical and down to earth, but nonetheless deeply spiritual.” Bishop Alison Taylor said: “Beth’s commitment, her prodigious knowledge of each partner project, her groundedness, her compassion were outstanding.”

AOA’s growth, its national focus, and its professionalism in meeting today’s standards of governance and accountability for international agencies – every aspect of AOA owes a debt to Beth Hookey. And beneath all of this has been her constant faith in a God who cares about poverty and marginalisation, who supports every move to reduce violence and civil war in the world, and who yearns that His kingdom ‘will come on earth” with our support.