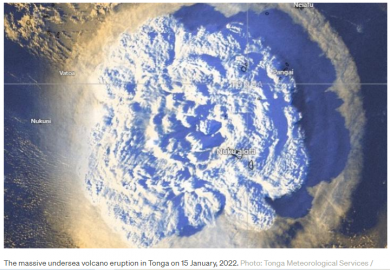 The eruption generated an ash plume 19.2 km high. While electricity and mobile phone networks have been re-established on the main island of Tongatapu, communications with the outer islands are intermittent. The Tongan Navy has reported major damage in the Ha’apai Islands, where there is an Anglican presence. Waves were estimated to be 5-10 metres in height and reached 500 metres inland.

The needs on the ground will be significant, especially in the northern more isolated islands. Pending assessments, the damage could include contaminated water and food supplies because of ashfall and damage due to inundation.

AOA is partnering with Anglican Missions New Zealand in their response to this growing emergency, given their strong connections in Tonga and relationship with the Diocese of Polynesia.

In light of the severity of this event and the likelihood of significant expected needs, we have decided to launch an Emergency Appeal through our Rapid Response Emergency Fund.

Initial funding will support the replenishment of four prepositioned relief supplies that are already located at Anglican churches in Nuku’alofa. This is especially important given that we are in the middle of the annual cyclone season.

Other than that, a further response and recovery project will be based on needs assessments from the communities in Tonga.

Donations to this Appeal can be made through our Rapid Response Emergency Fund here.