Rebecca Vander Meulen is the Director of the Mission Department for our partner, the Diocese of Niassa in the north of Mozambique.

In this first of a two-part article, Rebecca describes her work with Anglican Overseas Aid and the incredible impact of the water and sanitation work that has been saving children’s lives. 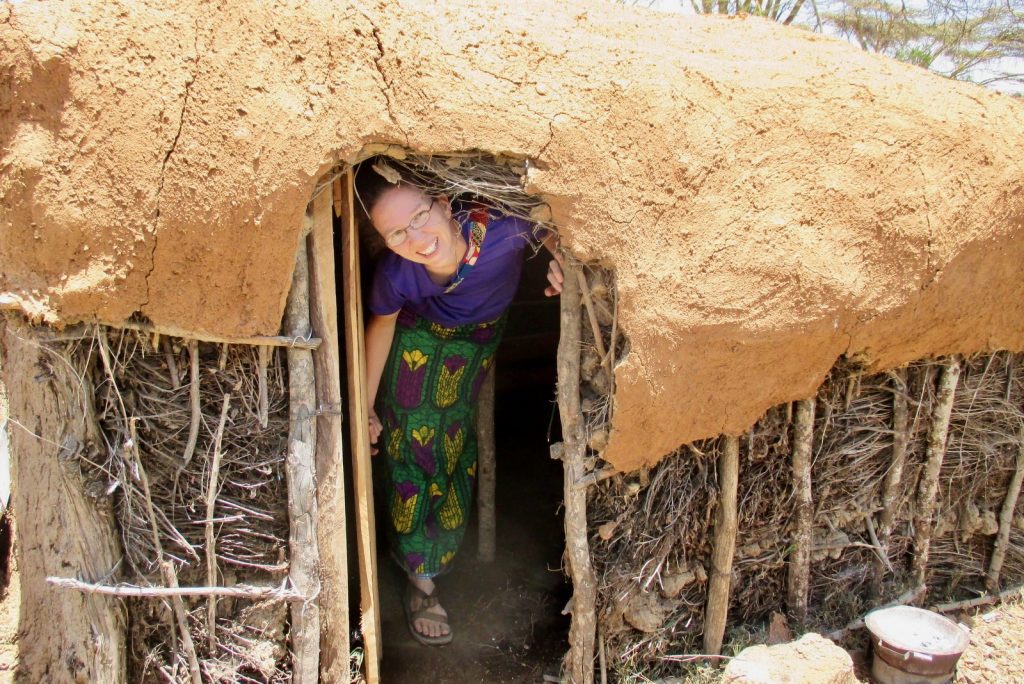 This hut is a traditional Maasai manyatta (hut) that has been built beside the Ministry of Health birth centre/health post in Kenya so that women can stay near to the midwife for 24 hours or so after giving birth. Rebecca visited Kenya recently for a learning forum on our work in Africa.
Rebecca has been learning about how the Anglican Church of Kenya has worked with the Ministry of Health to provide more culturally appropriate and accessible health care for mothers and babies. In Mozambique, access to health care for pregnant women and babies is a huge issue, which the Diocese of Niassa aims to work on over the next three years.

Rebecca Vander Meulen never expected to stay in Mozambique for more than a few weeks when she initially visited in 2002 to do research for a Masters thesis. But she was so warmly welcomed that she came back for a block of two years which has now extended to 14 years.

Mozambique is one of the poorest countries in the world. It has had many struggles over the years, including the war for independence, a civil war, and then for many years there was the dreaded spectre of HIV without any treatment. Rebecca though has found a strong sense of connection with the people and their commitment to get up each day and make the most of what they have and improving their life circumstances.

In the communities she works with in the Diocese of Niassa, water and sanitation issues have long been identified as great needs. People recognise the problem of diarrhoea and children becoming sick as a result. The first step in alleviating sickness was teaching the concept that diarrhoea comes from germs.

The success of the work is seen in the fact that, in the last three years, more than 60,000 households in 258 communities have gained a better understanding of health and hygiene. This enormous achievement has come about through the development of trust, understanding and the work of volunteers in the communities.

There are also groups of people called ‘Equipa de Vida’ or Teams of Life, who are the community development groups at the local level. Through the work of the Equipa de Vida, other communities found out about the good work that was happening and became interested in finding out more.

One question that arose was that of who the work belongs to. The major emphasis was that the work was always driven by the community. They are the ones who have sustained it; they own it. In describing this, Rebecca stated that, “the messaging of the work also responded to the local context. For example, if people didn’t have a hole in the ground for waste, they would dig one; if their hole didn’t have a cover, they would make one. It was always about improving on what they already had.”

She added that, “in another instance, the local cultural practise was that when you washed your hands, you would dip your hand in the bowl and then that bowl was shared by everyone. This would then pass germs around, so the practise needed to change.”

The model on how to teach the sanitation work has also been used to teach other work in the communities. As a result, messages about issues such as nutrition and HIV have spread around the diocese.

Through the success of the work, the diocese has received funding from major NGOs in the USA, Canada and the UK to use the model that was piloted through Anglican Overseas Aid. They saw that it was an effective way of producing dramatic results.

The Water, Sanitation, and Hygiene (WASH) team will play a crucial role in continuing to spread the model that has been so successful. They will continue to visit communities and talk with them. It is this personal touch which has proved so effective in the work of the diocese.

Look out for the final part of this article next week.