For the people of northern Mozambique, the last decade has been disastrous.

The decade delivered the worst drought in 30years (2015/16), and Cyclone Kenneth (2019) was the strongest ever recorded in the country. These events and 52 other natural disasters saw Mozambique experience the second-highest number of natural disasters and the associated third-highest natural disaster death rate of any African country between 2000-2020.
Punctuating the period between record-breaking drought and cyclones, an ongoing insurgency and armed conflict broke out in Cabo Delgado province in 2017, which to date has resulted in over 3,500 deaths and caused over 700,000people to flee their homes. The United Nations estimates that there are currently at least 1.5million people who require immediate humanitarian assistance and protection. Finally, COVID-19 has overwhelmed the country’s struggling health system. 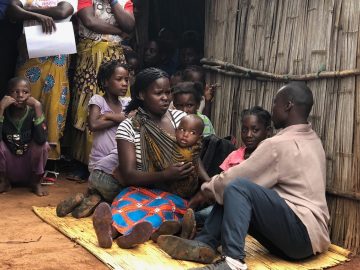 In St Paul’s second letter to the Corinthian believers, he commends the Macedonian Christians for their extraordinary generosity to the church in Jerusalem. There had been a great famine, and the Macedonian believers pleaded with Paul to allow them to help.

What is even more striking about the generosity of the Macedonian believers is that they were experiencing poverty themselves.

Paul calls their generosity nothing less than an act of grace.

Today we see this grace of God in the generosity of the people in northern Mozambique. Despite the fear of insurgency, conflict, food insecurity, COVID-19, and a lack of access to water and sanitation, they open the little that they have to others in need. Many families have taken in those seeking refuge, often having two additional families now living in their one small hut.

By supporting the Anglican Diocese of Nampula, through our Towards Abundant Life for All project, you can make a real difference.

The project’s goal is to support the members of 90 communities to live healthier lives, applying their knowledge and skills to achieve positive change for themselves. The project has a focus on HIV and associated vulnerabilities while supporting general community health, water and sanitation education and access to appropriate solutions.

The project’s success is built on local Adeptos (church workers) and volunteers from each community – called Equipas de Vida (Teams of Life) – who take responsibility for community education and action. Building the capacity of the Equipas de Vida has enabled a more effective response to the ongoing crisis. Responding to the growing challenge of malnutrition in children under five, the Equipas de Vida have embarked on a program of educating parents to make ‘enriched porridge’ – adding nutritious nuts, seeds, and vegetables to traditional maize meal for their children.

The dramatic influx of internally displaced people has seen the Equipas de Vida establish more community demonstration farms to provide training on growing highly nutritious and resilient vegetable varieties. In another act of grace, the produce from the community farms is sold to support those in greatest need.

Adeptos and church workers have received Government training on COVID-19 vaccines. They have passed this knowledge on to the Equipas de Vida and together are helping reduce fear in the community to encourage uptake. Peace Clubs have been established to support harmony between newly arrived people and existing community members, ensuring available resources are allocated based on need and that any disputes are resolved fairly and equitably. In the face of this ongoing crisis, the Diocese of Nampula team and Equipas de Vida continue to demonstrate acts of grace. However, facing a significant crisis, the people of Cabo Delgado and neighbouring Nampula province need our support and ‘acts of grace’ to assist them through this time.

Your donation to AOA’s Multiplying Impact Appeal maximises your impact in two ways. Firstly, every donation you make to this project will be combined with funding from the Australian Government through the Australian NGO Cooperation Program (ANCP) to reach more people. We have committed to contribute $1 for every $5 we receive from the Australian Government. Your donation will allow us to extend our programs. Secondly, the Towards Abundant Life for All project builds local community capacity, which in turn multiplies the impact.

Please join us in continuing to support the people of Cabo Delgado and Nampula as they lead positive change and support their communities through this crisis.