Home Anglican Church of Kenya Gabriel, an angel of Chaka

When the alternative is working to help support their families, education is freedom for these children in Kenya. 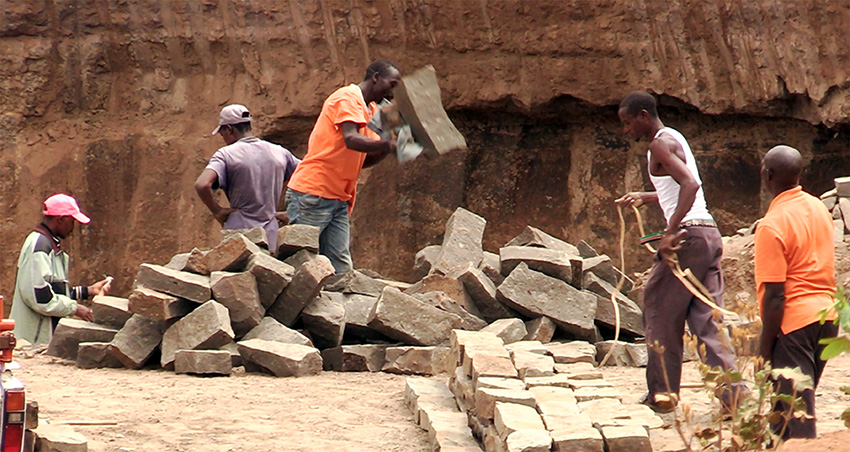 Men work in the quarry just outside of Chaka, Kenya. There are no longer children being forced to work here thanks to the Imarisha Maisha project. Photo credit: Chris Shearer, Anglican Media

Parents living in poverty are often faced with dilemmas that we find unimaginable. If you were faced with the choice of either not feeding your children, or taking them out of school to work in a quarry to earn income for your family and you, what would you do?

This was the very real dilemma facing parents in Chaka, Kenya.

Our project, Imarisha Maisha (Swahili for ‘strengthen life’), tackled this problem head on through the work of paralegals (also known as ‘nyumba kumi’). One of the paralegals, Gabriel, became aware of the situation at a nearby quarry, where children were working, crushing large stones. At the time, there were around 100 children, aged between 10 and 18 years, working in the quarry rather than attending school. He interceded, telling the parents about why their children should have an education, and now, two years later, they are all in school.

It wasn’t easy for Gabriel. He says, “when I started intervening for the children, some of the parents resisted. Over time though, most of them became convinced of the importance of having their children gain an education.”
Today, Gabriel is a popular local figure, who parents can turn to for advice when facing these dilemmas.

Gabriel is just one of the paralegals trained by our partner, the Anglican Church of Kenya, Mount Kenya West (ACK). They are trained not only in child rights, but also in women’s rights, so they can educate the community about abuse of women and children and supporting victims. Violence is a major problem in Kenya, with approximately 45 percent of both men and women having experienced violence as adults. Child abuse is also prevalent, with 32 percent of girls and 18 percent of boys having experienced sexual violence.

It is a monumental task to combat this, but the ACK is making significant in-roads in the counties of Nyeri and Laikipia through training about violence and child protection to a range of groups, including clergy and churches, schools, and community leaders through health centres and for government workers. Combatting violence is only one aspect of the Imarisha Maisha project, with the ACK also providing opportunities to learn about saving money, and establishing economic activities such as crop farming, seedling nurseries and raising chickens. These have provided an alternative to the child labour in the quarries.

In all of these ways the project is providing an avenue for women and children in Mount Kenya West to live in dignity – with full access to their rights, and the ability to leave a life of poverty and gain so much more.

The Imarisha Maisha project is funded in part by the Australian Government’s Australian NGO Cooperation Program (ANCP). We are proud to partner with them in this work.

To support this program select ’09. Kenya – Imarisha – building safer communities’ from the drop-down menu on our donate page.