Cyclone Winston as it appeared via NASA satellite, 2016

Islands and coasts are battered by wind and waves while the land bakes through droughts. Lives are lost, incomes dry up as yields dwindle, and homes and history are swallowed up as the sea claims the land.

As the environment changes, how do we react? How do people understand what is happening? And how does this impact how people prepare?

The recent IPBES (Intergovernmental Science-Policy Platform on Biodiversity and Ecosystem Services) Global Assessment Report is a damning read. The Earth is hurtling towards an age of mass plant and animal extinction; we are altering the natural world with our activities and ignoring the God-given mandate to take care of the resources given to us. In the process, we are also changing the climate, putting people, homes and livelihoods at risk. It is the most vulnerable that suffer both first and most.

“The health of ecosystems on which we and all other species depend is deteriorating more rapidly than ever. We are eroding the very foundations of our economies, livelihoods, food security, health and quality of life worldwide,” said Sir Robert Watson, IPBES Chair.

Alongside this, almost certainly driven also by climate change, is the increase in the frequency and intensity of extreme weather events, including the fires, storms, floods and droughts that they bring. Never has the link between the Earth, all that it sustains, and our human wellbeing been so clear with so many people impacted.

Across the Pacific, however, local people don’t need reports from the UN1  to tell them that this is happening. They can see it with their own eyes.

Reverend Amy Chambers, an Anglican priest in Fiji and previous Principal of St John the Baptist Theological College in Suva, spoke to us while she was in Melbourne late last year. She described the impact the rising sea levels are having on the Fijian people. Water from the ocean is seeping into people’s backyards as far as a kilometre from the shore. There is even a village on the main island of Viti Levu where the cemetery is submerged.

“The cemetery is actually now completely underwater. The people have a connection with the land; cemeteries are not just stones of dead people, but it’s now been taken over. Our ancestors are underwater,” says Amy.

“As I go around my island there are places where we used to go fishing as children; we don’t go there anymore. What’s happened to the place? Well, there are no fish there anymore. It’s because the reefs have become bleached.”

“I want them [my grandchildren] to have a connection to the land where I grew up and that I love. But it’s disappearing.” 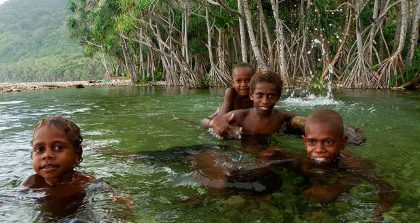 Children play in a waterhole in Vanuatu.

Fiji, like most of the Pacific, is majority Christian, with Christianity embedded in social, cultural and political discourse, permeating nearly all aspects of everyday life.2  When it comes to addressing, understanding and developing resilience to climate change and climate-related disasters in Pacific communities, it stands to reason that this discourse needs to reflect on Christian understanding.

It’s very hard to change the mindset of Fijian people, Amy explains. “We go to them and tell them about the places that are underwater. I say, ‘what are we doing about that?’ They say, ‘take your message somewhere else; God said we have got the rainbow, the land isn’t going to be flooded anymore.’ They go back to that.”

The Church has an integral role to play in helping people understand what is happening and what they need to do to prepare for the challenges that come with it. Not only is the Church a part of the community, and the clergy know the people and their needs, but the people also trust what the Church says.

In order to understand the underlying Christian beliefs that predicate people’s response in the Pacific to natural disasters, environmental stewardship, climate justice and disaster preparedness, the CAN DO (Church Agencies Network Disaster Operations) consortium has developed a Theology of Disaster Risk Management (TDRM). AOA was instrumental in the initial development of the TDRM concept and has taken the lead in facilitating the research in the Solomon Islands.

The research, which was also undertaken in Fiji, Vanuatu, and PNG, revealed strongly held beliefs around the issues of disaster, the environment and climate change which are deeply rooted in their Christian understanding. These beliefs could potentially help or hinder preparation, as well as response and recovery, in times of crisis. These beliefs then become a critical consideration for international aid organisations in working with communities to manage the risks of disasters and develop resilience.

For example, themes of ‘Last Days’ and ‘divine retribution’ were common responses in people’s understanding about why the climate is changing and weather events are becoming worse over time. Discussing ‘Last Days’ theology can therefore be important in addressing the fatalism that can accompany the belief that these events are ‘punishment’, and consequently, inevitable.

On the other hand, the environment is widely regarded across the Pacific as God’s creation, a great motivator for caring about and for the environment. Faith was also indicated as a strong coping mechanism, a source of encouragement, comfort and wellbeing after a disaster, key in helping communities recover.

This common understanding is helping communities be more prepared for the next time an extreme weather event occurs. In the current climate, that seems inevitable.

The people in the Pacific are majority Christian, and beliefs motivate responses to climate change, the environment and disasters.

1. IPBES is an independent intergovernmental body, established by the UN member states in 2012
2. How to collaborate with Pacific Churches for development research, Research for Development Impact Network, 2018, p. 9