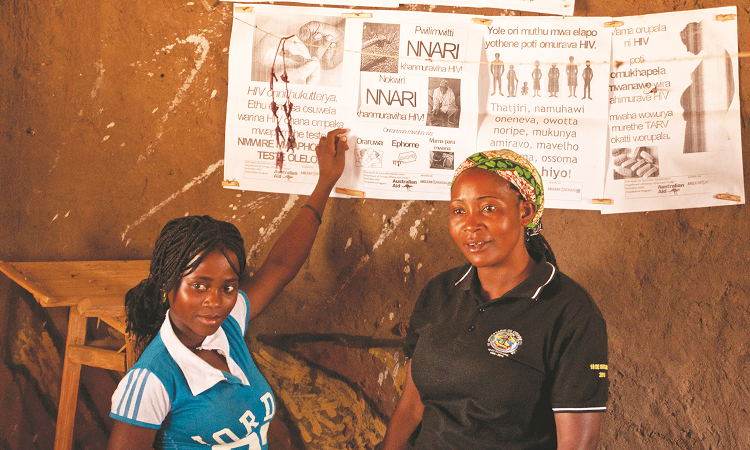 The church’s walls are made of mud, its roof simple thatching. Past the earthen altar adorned with the image of Christ someone has painted an angel directly onto the dried mud. There are a few plastic chairs, but for the most part the people here sit directly on the ground, leaning against the cool walls. Children peer inquisitively through the windows at us, the visitors to this remote village in northern Mozambique.

We’re here in the small village of Mucaria to see how the Diocese of Niassa’s Health and Wellbeing project, supported in this province by Australia’s Anglican Overseas Aid since 2010, is having a positive impact on the lives of rural communities throughout northern Mozambique. The project began in 2004 as the diocese’s first formal HIV and AIDS education program. At that time it was estimated that over 16 per cent of Mozambicans aged between 15 and 49 had HIV, and poor education on the nature of the virus meant more and more were being infected. Those who became HIV positive faced growing stigma from the community, fuelled by myths like the disease could be spread by eating from the same plate or drinking from the same glass as someone with the virus. Misinformation abounded and Mozambicans suffered.

“I once thought HIV could only be transmitted through sex,” one man tells us in the local language Makua, which is then translated into Portuguese and then English. “I didn’t realise a child could get HIV from its mother.”

“Before I learned about testing I was very anxious [about getting] a test,” says one young woman shyly. “I thought that they took all of your blood out of you.”

These attitudes and beliefs were the first target of the Health and Wellbeing project, but simply going to these communities and telling them they were wrong wouldn’t have been effective.

“We firmly believe that real good community development happens by the members of the community themselves,” explains Director of Mission for the Diocese of Niassa, Rebecca Vander Muelen, an American who has lived and worked in Mozambique for 13 years and now runs the diocese’s range of community development programs.

“So instead of having staff who come in from the outside to help transform a community, we really want to empower the community itself to do that work.”

She explains this is done through the Equipes de Vida – Portuguese for “Teams of Life”. A typical Equipa de Vida is made up of 15 to 20 people drawn from a cluster of nearby villages. They’re trained in their communities about key messages and then initiate responses to the most pressing issues. Each month they’re visited by the regional adeptos, or field workers, whose role it is to support the teams by helping to facilitate meetings with community and religious leaders, as well as planning, coordinating, monitoring and reporting on the community-led initiatives. Local catechists and priests help the adeptos coordinate and support the equipes. Also involved are the animators, a relatively recent addition to the project, who are also drawn from the community and work with three to four nearby teams. Essentially, they provide additional support to the teams so that adeptos only need to visit once a month or so – no easy task when crossing the diocese takes over 11 hours of driving on unsealed roads.

The combination of distance and context-specific education has meant the project has been shaped into a sustainable, community-led program. While a significant amount of the project continues to centre on HIV, it has since expanded into other key messages. Equipes de Vidas across the Diocese now educate their communities on such broad topics as children’s nutrition, sanitation projects, gender issues and social support networks.

“We are not telling people what to do,” says Rebecca. “We are walking alongside each other, learning from each other, and so though we do indeed have some very highly trained staff people, they get down in the fields and work with the Equipa de Vida, do door-to-door campaigns with them. And that really develops a sense of trust, a sense of relationship: ‘we are in this together’.”

After individual presentations in the church, our group is invited to watch a performance put together by the local Equipa de Vida. The village gathers beneath a canopy of dried grass and for a moment it’s unclear who is performer and who audience. But then all eyes turn to a man with exaggerated movements projecting his native tongue with an aggrandised tone – the local catechist. In the performance he plays the role of a man who contracts HIV, but decides to visit a witch doctor for treatment. Eventually, after no improvement, a friend carries him to a clinic, where he is tested, determined to be HIV positive and given anti-retrovirals to manage the virus. But in a cruel twist of fate, his community ostracises him, believing they might catch the virus from him through simple contact.

There are a lot of lessons here to unpack about tests, treatments and needless stigma, but the performance is an interesting example of how the teams make their own decisions about how to disseminate information. This focus on community-led initiatives has ensured the project is not only sustainable, but that it also doesn’t create a dependence on aid. All it requires is imparting knowledge through the program. In the following days as we visit more villages, we hear the same thing again and again: “Please teach us more.”

“AOA is committed to community-led and strength-based development, which means that we do not dictate to partners what their priorities should be or how they should do their work. It is a dialogue which tries to leverage the partner’s existing capacities, priorities and local plans. In our experience this is the most respectful and effective way to work,” he says.

“I think the work in Mozambique is brilliant. It is truly locally owned and led. There is no ‘shopping list’ mentality of what foreign donors should give them. The community knows that it needs to own and resolve its social challenges using its own resources. More than anything, this partnership involves dissemination of advice and ideas. Church communities supply the energy.” 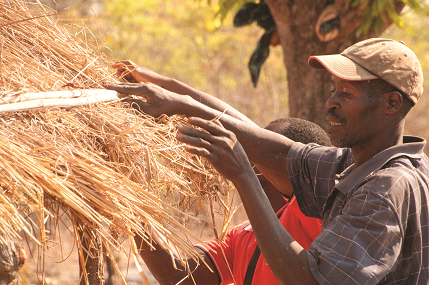 Indeed, the energy of these communities and individuals is seemingly inexhaustible. Jorgito, an adepto whose area of responsibility includes Mucaria, has a simple explanation.

“God is the main one who helps our work. Without God giving us our life we can’t do anything. Without God, even if you’ve got a car or a motorbike, you can’t get to where you want to go.”

It appears that when the church engages in the real issues and circumstances that affect the community, much more happens than is planned for. In the last 10 years, the Diocese of Niassa has welcomed over 200 new Anglican churches. For Dr Mitchell, it is a sign of what can happen when the church commits to helping communities develop and flourish.

“When the church takes its responsibilities seriously – serving the local community in a grassroots way in the midst of its own grinding poverty – for many that’s an unexpected, and yet compelling proposition. There’s a message there that we can all learn from and celebrate,” he says.

Bishop Manuel Ernesto of the Diocese of Niassa agrees that the project has definitely played its part in the recent growth, although is quick to make it clear that they’re not running the project seeking converts. Indeed, a number of beliefs are represented in the equipes or the communities they serve.

“As we used to say, we are just running behind the Holy Spirit,” Bishop Manuel says. “It is a spontaneous growth, so the communities, they are just building their own churches. Makeshift churches. And then we go there and train their catechists and then a bishop comes to confirm people and teach them. That is what we are doing.”

In fact, Rebecca argues that the physical presence of churches in the rural areas was an important factor in the project’s early successes, as churches are often the only grassroots organisations in extremely remote communities. When she first arrived in Mozambique many rural communities were inaccessible, even by road, and NGOs tended to focus on helping the communities they could actually reach.

“One of the few things that existed in these really rural communities was the church, which made the church a perfect mechanism for helping spread good health information,” she explains. “Many, many, many people haven’t [had], don’t have, any access to information about HIV other than through the church.”

Back in Mucaria it’s time to say goodbye. The villagers sing and shake our hands warmly. It’s hard to imagine what this community would have been like at the height of the HIV epidemic. There’s no doubt that their lives are still difficult, but there’s a resilience and resourcefulness here, a sense of “things are getting better”. You can see it in their smiles, hear it in their laughter. Rebecca provides some perspective, saying, “To me, the most exciting [thing] of all is to see communities who felt helpless realise that they actually do have control over many aspects of their own health.”

If you would like to donate to our Health and Wellbeing project in Mozambique, click on the ‘Donate Now’ button: