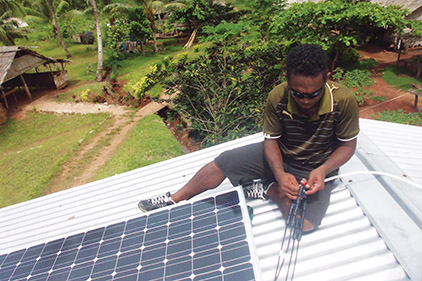 The link is a man called Holland Sikou. In his early 20s, Holland played the world game for his country, but since 2011, he has been the Solar Co-ordinator for the Anglican Church of Melanesia (ACOM) in Solomon Islands.

With our support, ACOM provides solar lights in rural communities in the provinces of Ysabel, Makira, Malaita, and Central Solomons as part of our Bringing Light to Rural Families project. The provision of solar lights to these communities is transforming the lives of thousands of people.

Solar lighting is providing enormous benefits for these communities, including income generation opportunities through the sale and maintenance of the lights. Solar is also quickly replacing kerosene as a light source. Kerosene is expensive, gives off harmful fumes and is a fire danger. Our project has already directly contributed to the provinces of Makira and Ysabel eliminating the use of kerosene.

Holland is excited that the project is meeting a great need. “Solar lights became very popular about five or six years ago,” he says. “Solar is excellent technology. At the beginning this was very expensive, so the churches decided to be involved with the project, because communities could not access the lighting because of its high cost.”

The project is currently partnering with the Solomon Islands Government and the South Pacific Commission on a pilot project to provide solar lights and refrigeration in two rural health centres. This is improving the delivery of health services, such as improved light to guide nurses assisting pregnant mothers giving birth. 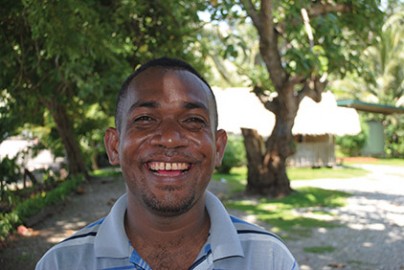 The desire to improve the lives of his fellow Solomon Islanders comes from Holland’s deep Christian faith. “That is the driving force behind me,” he says. “I prioritise people’s needs. They are my brothers and sisters. They deserve to have these opportunities.”

Holland’s role focuses on training others in the installation and maintenance of solar technology. He also ensures that all activities of the project are carried out, and monitors where the project is being implemented in the provinces.

Training in how to maintain and fix solar lights ensures the sustainability of the project, as people are able to maintain the lights over time, with some people earning a small income by offering maintenance services to friends and family.

The project also includes small business training that helps people to generate income from selling solar lights in their communities, with profits shared between the individual seller and ACOM’s other community development work. In the very remote areas, profits have been used to pay for items such as school fees and stationery for students. The Mothers’ Union in Makira Province was able to use their profits to replace their leaky roof. “This is all from money the communities would not have had if it were not for the solar lights,” Holland explains.

Holland says that it is hoped that the impact of solar lights will extend beyond providing a cheaper source of light, reducing the risk of fire and decreasing pollution. He says that stress about money can be a trigger for men being violent towards women and children. It is hoped that as families gain more income from the sales of the lights that family violence will decrease.