Donate to the volcano response in Vanuatu

Last year a state of emergency was declared for the island of Ambae in Vanuatu, triggered by the effects of the eruption of the volcano Manaro Voui. For the second time since September 2017, all the residents of Ambae Island were evacuated, leaving behind homes, land, and livestock – all possessions other than those they could carry.

Anglican Overseas Aid is committed to helping our long-term partner, the Anglican Church of Melanesia (ACOM), with their relief efforts, and has launched an appeal to raise urgent funds. 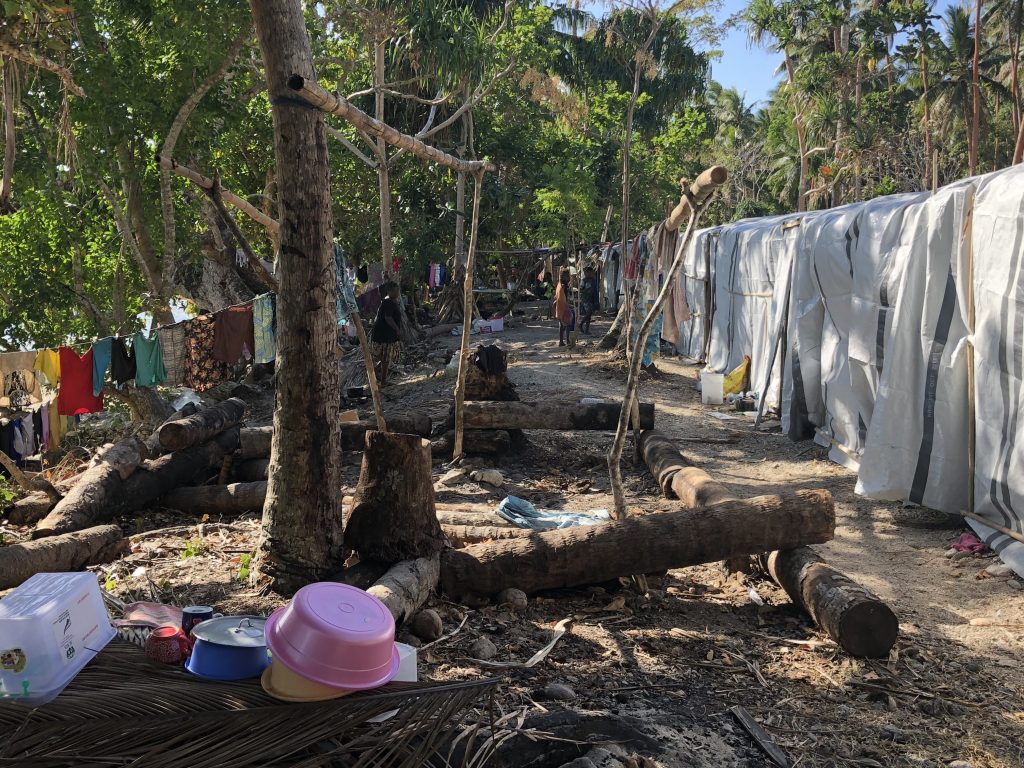 For over a year the population of Ambae has suffered from the effects of volcanic activity, including acid rain, contaminated water, poisonous gases and falling ash. However, in September, the ash became so severe that the sun was blocked out completely, blanketing everything and prompting a full and compulsory evacuation.

By the end of 2018 the state of emergency had ended, however the evacuated people were left in limbo, as they consider whether to return home or try settle elsewhere.

The displaced people of Ambae are still facing uncertainty about the future – even if they return, they will need to salvage what is left of their livelihoods, homes and animals, all left behind on the island that has been subject to ash and volcanic contamination.

Thousands of residents of Ambae are still living in make-shift tents in ‘evacuation centres’ on the islands of Maewo and Santo, but this set-up is unsustainable and puts a massive strain on the local communities, who have rallied together as much as they can to help.

The local Anglican communities are displaying an amazing picture of unity, opening their houses to as many as possible. However, communities have doubled in size in the space of a few weeks, and resources are dwindling.
Along with the hot and uncomfortable temporary tents, they are also facing a lack of basic supplies, only small rations of rice and other food, and have limited access to clean water and sanitation.

As the reality of the long-term situation becomes apparent and the stress, anxiety and trauma of the loss and disaster increases, the need for Psychological First Aid will become more urgent, increasing the requirement for those most affected to receive help to cope.

ACOM is playing a vital role in responding, but needs more support and has requested assistance from their partners to help.

How you have made a difference already

Anglican Overseas Aid has already responded financially to our partner in Vanuatu, the Anglican Church of Melanesia (ACOM). Using money set aside in our Rapid Response Emergency Fund, we provided $10,000 to assist with provision and recovery efforts.

ACOM has been a first responder since the first volcanic activity in September 2017. They continue to provide Psychological First Aid, counselling, gender and protection training and awareness, and temporary accommodation to hundreds of school children, teachers and accompanying families.

For an update on the appeal (as of our January 2019 Summer Abundance) click here.

Your continuing support to ease this suffering will help us reach thousands of people.

What your donations will provide

Your donations to this appeal will support ongoing relief efforts, including:

To donate to our Ambae Vanuatu Volcano Appeal, click on the ‘Please Donate’ button below (choose ’02A. Ambae Volcano Vanuatu Appeal’ from the Donation drop-down menu) or call us on 1800 249 880.

Read more about the situation:

Vanuatu volcano: Entire island to be evacuated as ash blankets villages and blacks out sky – ABC

No Plans for Ambae evacuees to return until volcano settled

Ambae volcano eruption: Why is Vanuatu the most dangerous place in the world?

Promote our appeal with videos

There are five videos. Four of them are approximately a minute in length and outline different needs in the communities. The fifth video contains a message from Archbishop Philip Freier urging Anglicans to donate.

The videos can be viewed on our YouTube channel here.