Thanks to your support through Anglican Overseas Aid’s Rapid Response Emergency Fund, our partner in Mozambique, the Missionary Diocese of Nampula, was able to help many in the aftermath of consecutive cyclones in the coastal African country in 2019.

Food assistance was given to remote communities most in need after Cyclone Kenneth, reaching 67 of the most vulnerable families.

Cyclone Kenneth was the strongest storm to make landfall on the African continent since records began. There was widespread flooding and catastrophic winds which caused loss of life and much damage. People faced immediate humanitarian need, so we offered help to our partner in Mozambique, the Missionary Diocese of Nampula (DoN), through our Rapid Response Emergency Fund. Assessing the needs in the affected communities, our partner saw that the immediate need was food and clean water, as well as supplies so that the children could stay in school. 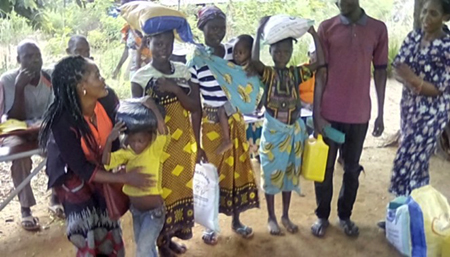 Because the church is so highly trusted, our partner was able to access remote communities that aren’t included in other relief activities, including government relief. With some areas of the country suffering from ongoing conflict, the politically neutral position of the church was an advantage to reaching remote communities and helping those most vulnerable.

Reaching these vulnerable people with food assistance was so important in helping them get through the initial period after the disaster, where barns holding food were destroyed and low supplies left little to eat. With our support, the Missionary Diocese of Nampula was able to help 67 families (300 people) across three communities with food rations, ensuring they had enough to survive in the following weeks.

In addition to helping families in great need, the Diocese was able to reach a school in a particularly impacted area, providing 750 students with nutritious food and school supplies. By providing the students with enriched porridge, the Diocese ensured that the children were not only receiving something to eat, but that it was energy and nutrient rich. Additionally, the children received school supplies so that once they had food in their bellies, they could continue with their learning! In times of disaster it is vitally important to keep children learning and going to school, as once they stop attending, protection risks escalate, and many won’t return.

Nutrition training and enriched porridge was provided to 750 children.

Alongside the food assistance and nutrition initiatives, Water and Sanitation Health (WASH) training was conducted within all three communities highlighted as being in greatest need. As the cyclones brought heavy rainfall and widespread flooding, communities became susceptible to waterborne diseases, and illnesses spread by mosquitoes, like malaria. This training, reaching 400 people, helped communities understand risks, improve hygiene and prevent illness.

Reflecting on the humanitarian response efforts, the Diocese has committed to a new focus on disaster preparedness and relief work. As Mozambique is located on the eastern coast of Africa by the Indian Ocean, communities need to be aware of the ongoing threat of cyclones.  By way of response, the Diocese has invested in training up community and church leaders in disaster mitigation and response so the community can be involved in early planning for climate-related emergencies, which are occurring more frequently and with increasing severity than at any time in the past.

With your support of AOA’s Rapid Response Emergency Fund, we are quickly able to send assistance when disasters like Cyclone Kenneth happen, so that people are able to have their immediate needs met. Thank you so much for partnering with us to help support people in their time of greatest need. 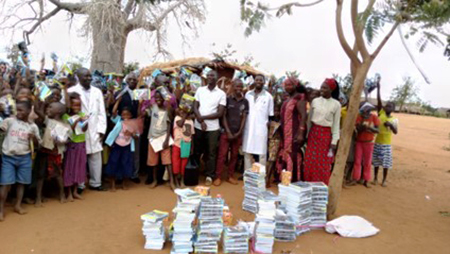 School supplies were made available to 750 school children to help them keep learning and stay in school.